A couple from Istinka, a small village located 12 kilometres outside St Petersburg, Russia, have built a concrete replica of the Great Pyramid of Giza right in their own backyard.

Measuring 9 meters above ground and 9 meters deep, and consisting of about 400 tonnes of concrete blocks, the pyramid of Istinka is 19 times smaller than the structure that inspired it – the Great Pyramid of Giza, in Egypt. But, according to its owners, Andrey Vakhrushev and his wife Victoria, apart from the size difference, the two imposing structured are actually quite similar. The couple claim that attention to detail was crucial for this project, adding that they spent years studying the design of the Pyramid of Cheops and visited it many times just to get everything right. 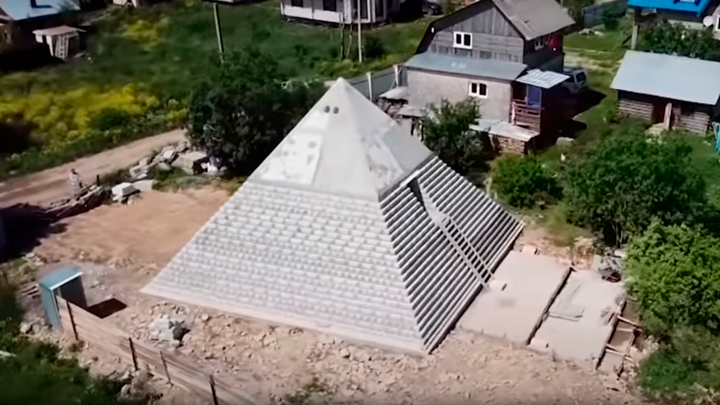 “I was really striving to achieve exact sizes, up to one-centimetre accuracy, on the right level, not with one or two-centimetre error, but the exact size, perfect and nothing less,” Andrey said. “Of course, the blocks we used are different, but this is still a monolithic structure, we made careful calculations in terms of masonry, making it in a special way so that it is as close (to the original) as possible.”

After calculating the exact size of their pyramid, Andrey and Victoria spent a month looking for a construction crew willing to build it according to their specifications. Many flat out refused, but they finally found a contractor who actually thought the project was cool. It’s not clear how long construction lasted, but the pyramid first started making headlines in Russia back in March. 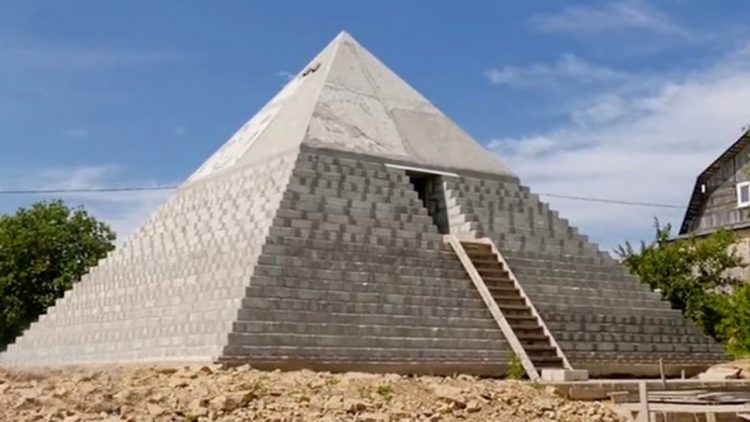 While Euronews recently described the Pyramid of Istinka as an unusual garden decoration for an eccentric couple, Russia media tells a very different story. Apparently, the Vakhrushevs have made some pretty wild claims about their pyramid, including that it can protect people from harm and heal them.

For example, Nevsky News reports that Andrey Vakhrushev said that all workers who suffered injuries during the construction process were healed by the pyramid, and that none of the members of the construction team was ever sick during the building process. In a conversation with a correspondent of Nevsky News, Vakhrushev said that he and his wife began to build a pyramid in order to save the Earth. According to Metro News, Victoria said that their pyramid can boost immunity and protect from coronavirus infection.

Those who would like to benefit from the healing and protective powers of the pyramid will be able to book a stay inside it to meditate and fill themselves with its energy. They’ll have to cough up between 3,500 ($50) and 10,000 rubles ($140) a night to do it, though.

Whether you believe in the super powers of this Giza Pyramid replica or not, if you can’t afford a trip to Egypt to see the original, you may want to consider the Russian village of Istinka as an alternative.

We use cookies on our website to give you the most relevant experience by remembering your preferences and repeat visits. By clicking “Accept”, you consent to the use of ALL the cookies.
Cookie settingsACCEPT
Manage consent

Any cookies that may not be particularly necessary for the website to function and is used specifically to collect user personal data via analytics, ads, other embedded contents are termed as non-necessary cookies. It is mandatory to procure user consent prior to running these cookies on your website.